In addition to archaeology, the art of antiquity and classical philology, music was another great love of James Loeb which he pursued with tremendous professionalism. His mother, Betty Loeb (née Gallenberg), came from a family of musicians from Mannheim, where her father played first violin in the archduke’s orchestra; she herself played the piano and violin to concert standard and studied at the Paris Conservatoire. She ensured that the musical life in the Loeb household in Cincinnati and later in New York was both rich and of a high standard, regularly organising chamber music matinées in which family members (apart from the father) and guests participated.

James Loeb received lessons on the violoncello (his main instrument), piano and organ from an early age. According to his nephew James Paul Warburg, he was the only one of the siblings to possess real musical talent. He remained an excellent cellist all his life and was almost as good a pianist. From an early age and for a long time after he had moved to Germany he played an active role in the public musical life of his American home country. He is famous for having founded the Institute of Musical Art (together with Frank Damrosch) and for helping to support its successor institute, the Juillard School of Music, which later achieved world fame.

In Munich Loeb maintained a musical salon which was of a very high standard. During the regular chamber music matinées held there he particularly enjoyed playing the cello part in the string quartets of Haydn, Mozart, Beethoven and Schubert, which he especially loved. But he was also well versed in the contemporary music scene of the time: the composers Max Reger, Hans Pfitzner, Richard Strauss and even Gustav Mahler, whose symphonies Loeb had heard and admired, were apparently all guests in his Munich townhouse. Later in Murnau regular music-making in an ensemble or (alone) at the piano was a frequent source of spiritual regeneration following phases of depressive inactivity, many of which lasted for several years.

As a pianist and cellist James Loeb was an excellent musician all his life. For fifty years his music collection was thought to have been lost after his library in Murnau was dispersed. A significant part of it has been rediscovered in the New Municipal Library in Augsburg.

In 2012/2013 the New Municipal Library in Augsburg and the James Loeb Gesellschaft e.V. showed for the first time a selection from what was once the extensive sheet music collection of James Loeb. Rare printed editions of late Romantic music provide an insight into one of the glittering music salons of the haute bourgeoisie in the United States in around 1900. 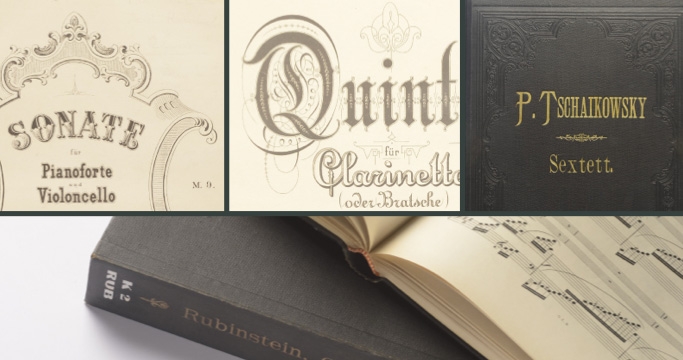 After James Loeb’s death the extensive library remained fully intact in his villa in Murnau throughout the Second World War and well into the 1950s. A catalogue drawn up in 1946 under the supervision of the American forces of occupation lists 213 volumes of printed music as well as 163 volumes of specialist literature on musicology in addition to the approximately 10,000 volumes literature on archaeology, art history, philology, philosophy, agriculture and poetry and fiction. The entire library was dispersed in 1960 to permit the conversion of the room in which it was housed into a chapel for the sanatorium. Most of the contents were sold and hence “scattered to the winds” through an antiquarian bookseller’s in Bonn. From this point onwards the music collection was also thought to have been lost.

An important part of it, however, has been rediscovered in Augsburg. 95 volumes of sheet music, in other words almost half of the former Loeb music collection, has been in the possession of the Music Library of Augsburg Municipal Library for decades.

The Municipal Public Library of Augsburg acquired the stock of sheet music in the spring of 1961, in other words shortly after the dispersal of Loeb’s library, from the Augsburg music store Anton Boehm & Sohn, which also operates a publishing company for Catholic church music. It seems the volumes of music had landed there via the Diocese of Augsburg – apparently without the decisive background information about their origins. And so for decades the music was initially integrated “incognito” into the normal stock of music available for loan in the municipal music library.

The large-format volumes and slipcases bound in black with gold embossing contain for the most part printed music from the late nineteenth and early twentieth centuries, including some valuable first editions of chamber music works by composers including Brahms, Dvořák, Tchaikovsky, Rimsky-Korsakov and Richard Strauss as well as a large number of additional rare chamber music works in seldom-found early editions.

However, it is clear that Loeb was not acting in this sphere (printed music) as a bibliophile collector. Irrespective of his sure instincts with regard to quality and historical value, the acquisition and maintenance of his music collection was rather determined by aspects relating to musical praxis: works with the same instrumentation are bound together to form a mixed collection, and as time passed prints which had become valuable could be found side by side with simple everyday editions, some of them still available for purchase today. The music collection clearly did not belong to his official scholarly library, but judging by its origins and purpose was clearly purely private in nature. Not a single volume of music contains Loeb’s exlibris with the familiar motto “Opes adipiscendae ut dignis largiamur”; by contrast, many of them bear Loeb’s personal signature. Some volumes – if not the overwhelming majority of the stock! – might have originated in Loeb’s mother’s music collection in his parents’ house. Volumes attractively ornamented in accordance with late-nineteenth century taste (fig. 2) and licence stamps of American representatives of German music publishers (e.g. Schirmer, fig. 3) in a number of old editions allow us to suspect that this may have been the case.

In spite of Loeb’s predilection for string quartets of the Viennese classical period (see above), the main focus of the Augsburg stock, but also of the Loeb chamber music collection in general, clearly lies on chamber music for strings and piano. Here we find on the one hand composers of the generation ca. 1830‒1840 (Brahms, Dvořák, Tchaikovsky etc.) who during Loeb’s youth in America were considered to be among the established and leading music greats (not least thanks to the presence in the New World of their European publishers), and on the other a specifically German repertoire as it was cultivated in the salons of the bourgeoisie during the late nineteenth century and which to a large extent is no longer current. Thus the music collection, too, was clearly shaped by the musical taste of the family of James Loeb’s mother.

As a remarkable treasure of musical and cultural history, the music collection from the Loeb library in Augsburg Municipal Library is no longer available in the normal lending section. In future it is to be made available to the public again in the form of exhibitions and concerts, also in cooperation with the James Loeb Gesellschaft e. V. – in other words, for a charitable purpose, in accordance with the wishes of James Loeb, who always found comfort and relief from suffering through music.