Cooperation between the James Loeb Society, the Schlossmuseum and the State Collections of Antiquities, Munich

At the suggestion of the James Loeb Society a permanent exhibition dedicated to its name-giver was opened on 26 April 2017. Not only Dr. Sandra Uhrig, the Director of the Schlossmuseum Murnau and Dr. Florian Knauss, Director of the State Collections of Antiquities, had declared without hesitation their willingness to create a permanent exhibition. The State Collections of Antiquities, Munich will now lend three objects at a time to the Schlossmuseum Murnau from the collection of antiquities bequeathed by Loeb, which comprises some 600 objects. Visitors to the museum can look forward to viewing the terracottas, vases and a variety of other treasures.

In his introductory speech Dr. Hermann Mayer recalled James Loeb, who for a long time seemed to have been unfairly forgotten, despite the fact that the special exhibition in the Schlossmuseum curated by Dr. Brigitte Salmen in 2000 had already pointed the way.

Dr. Julia Stewens, the Deputy Mayor of Murnau, mentioned Loeb’s remarkable service to the town of Murnau, which was evidenced in particular in the hospital which he donated, which is currently undergoing renovation and which will contain numerous projects as the James Loeb House. James Loeb was an “all-rounder” who demonstrated his interest in a wide range of subjects.

In his lively and detailed lecture, Dr. Florian Knauss traced an arc from James Loeb the man from his career as a banker to his position as a respected connoisseur of antiquities. He emphasised that Loeb was possibly even the greatest promoter of classical studies of his time. As early as 1902, when he was starting his studies of the Classics at Harvard University, he had acquired his first objects at an auction in London. The growing collection bore his signature, for James Loeb had “a fine eye for detail”.

The James Loeb Gesellschaft e.V. would like to thank Dr. Sandra Uhrig and Dr. Florian Knauss for their willingness to promote greater recognition for the memory of James Loeb once more through their personal support. 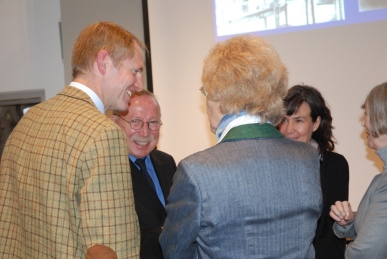 Flyer permanent exhibition in the Schlossmuseum