First Fellowship at the ZI Munich

First Fellowship at the Central Institute for Art History in Munich

Dr. Tianna Uchacz is carrying out a research project on the Renaissance painter Maerten van Heemskerck.

The James Loeb Fellowship is a joint project between the James Loeb Society, the Harvard Club Munich and the Central Institute for Art History in Munich. 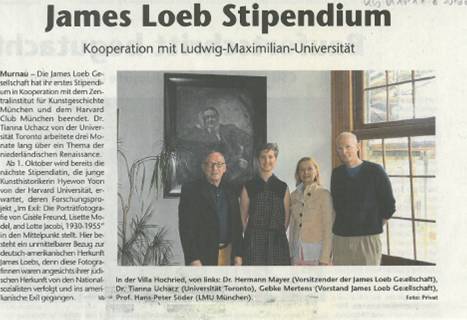 Tianna, how did you get in touch with art for the first time?
I took my first real art class in high school. The mandatory art history component was awful—it was dry, formulaic, and uninspiring. The following year, I had a different teacher, and something clicked. I fell in love with art and art history, and I have been studying it ever since.

Did you paint as well?
Back then, I did. Actually, I was more interested in printmaking, especially woodcuts.

Which colour is your favourite? And why?
Green is my favourite colour! It makes everything feel fresh and lush and alive. Conventional  wisdom says humans perceive green in a wider range than any other colour. Whether or not that’s true, I never tire of green and its many shades.

If you were lent a painting for one year, which one would you choose?
I would choose Parmigianino’s Madonna of the Long Neck in the Uffizi in Florence. I had the opportunity to see it in 2003, and I’m long overdue for a return visit. It is one of the most iconic paintings of the 16th century, more specifically of Italian Mannerism. There’s something very compelling about the shapes and the elongation. The distortion of forms is incredibly beautiful, even though it’s strange and unnatural—uncanny even. The lines are languid and sinuous, and the eye traces them slowly and with pleasure. I get lost in the lines.

There are no everlasting answers in art history. How do you find that?
I find that notion dissatisfying. It is true that interpretations and methodologies come in and out of fashion, and the questions art historians ask of their objects reflect contemporary interests as much as they might reflect historical concerns. That said, I think we should see art history as an ongoing collaborative and cumulative process rather than one in which newer ideas supplant older ones. Also, I’m not enthusiastic about understanding art making and art viewing as radically subjective acts. I believe there are fundamental structures that order human perception, so there exists the possibility to make claims about art that can include but extend beyond subjective responses. Also, art is a medium of expression, of communication, and it yields more when you approach it with a spirit of generosity. You have to want to bridge the gaps between you and the object, between you and the maker, between you and other viewers across time, and between you and your own viewing self. You cannot resolve the work of art, but you can feel as if you’re getting closer. That fact is frustrating, comforting, and endlessly motivating.

Did you ever get in touch with the Loeb Classical Library? And if yes, for which purpose?
Oh yes! I reach for the LCL volumes when I am looking for a reliable and accessible translation of classical texts. When I was working on paintings depicting Mars and Venus Surprised by Vulcan, I immediately turned to the LCL volumes of Homer’s Odyssey, Ovid’s Metamorphoses and Ars Amatoria, and Lucian’s The dream, or The Cock. These helped me understand variations in the narrative and the text itself in later, sixteenth-century editions of these works. Actually, one thing I find curious is the way a given library will present the LCL. Some libraries shelve all the LCL volumes together. Other libraries split them up, so that books by Homer are in the Homer section, Ovid in the Ovid section, and so on. But I prefer them being together, not least because it is aesthetically pleasing to see the now more than 500 red and green volumes side by side.

What is your favourite spot in Munich?
Indisputably, it’s BallaBeni, the ice cream bar in Theresienstraße, close to the Alte Pinakothek. Their black olive and lemon ice cream is one of the most amazing things I’ve ever eaten. Then there’s the basil lemon flavour, the ginger chocolate... it’s all phenomenal! I’ve been there at least a dozen times over these three short months.

Thank you, Tianna. Have a safe trip home! And good luck at Columbia University.

The interview was conducted by Gebke Mertens
July 30th, 2017 at Munich Airport