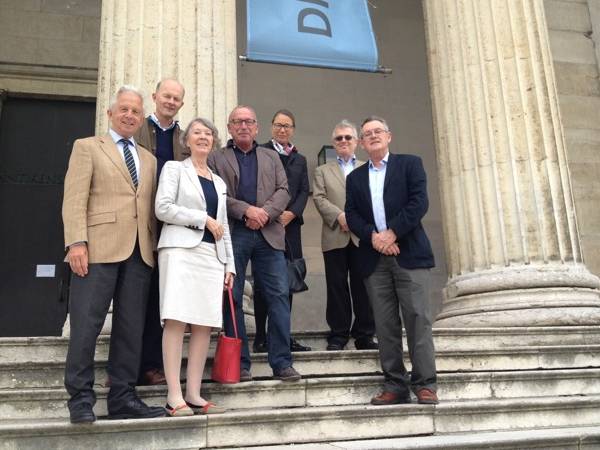 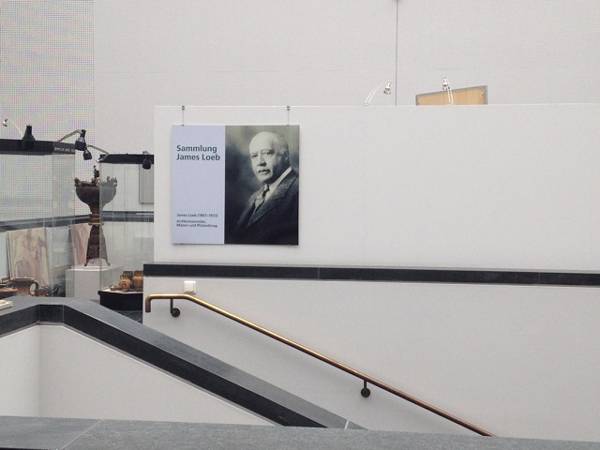 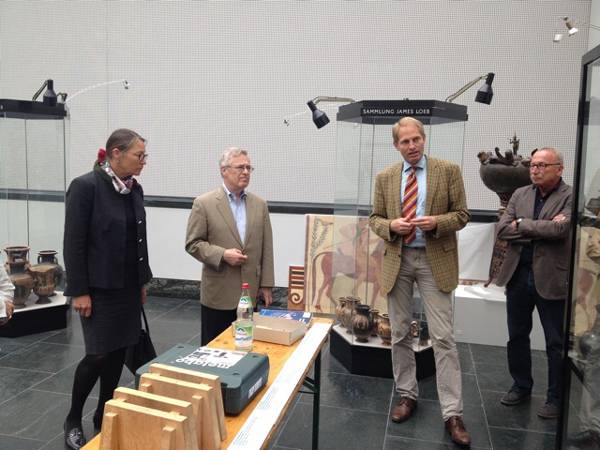 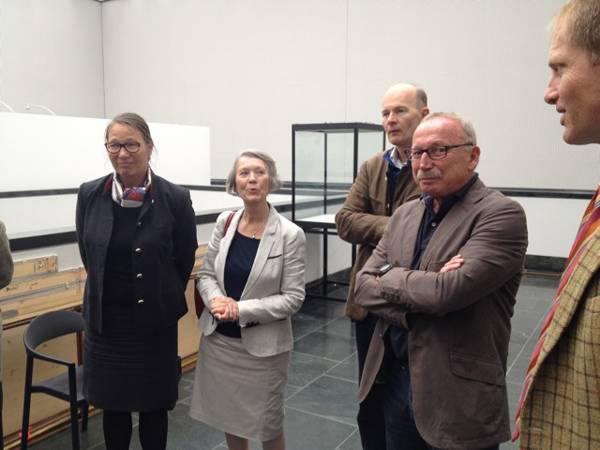 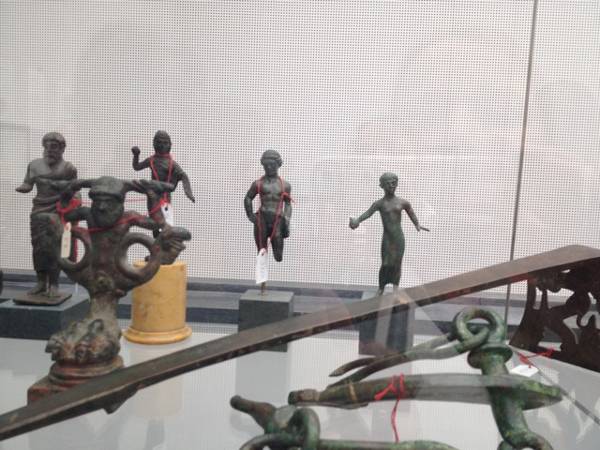 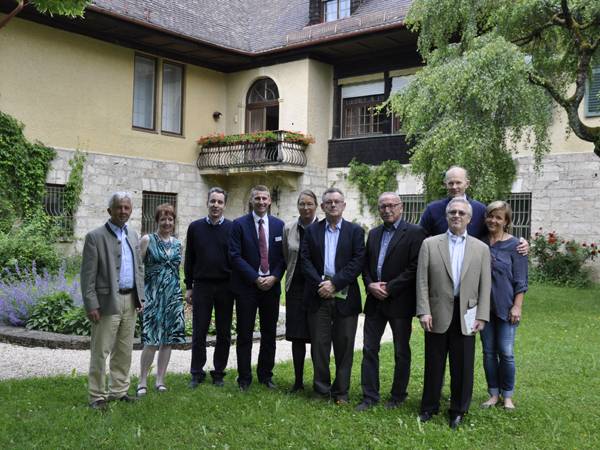 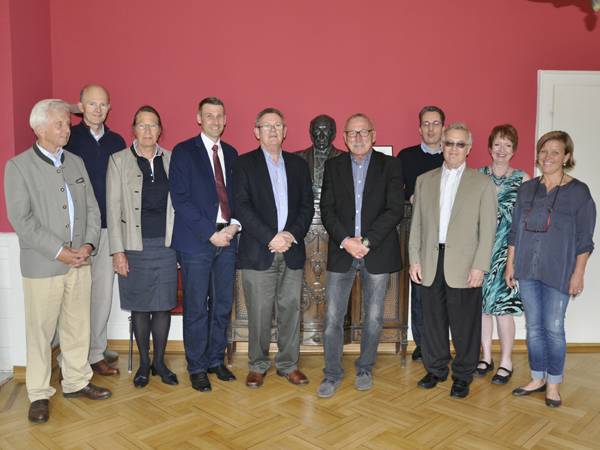 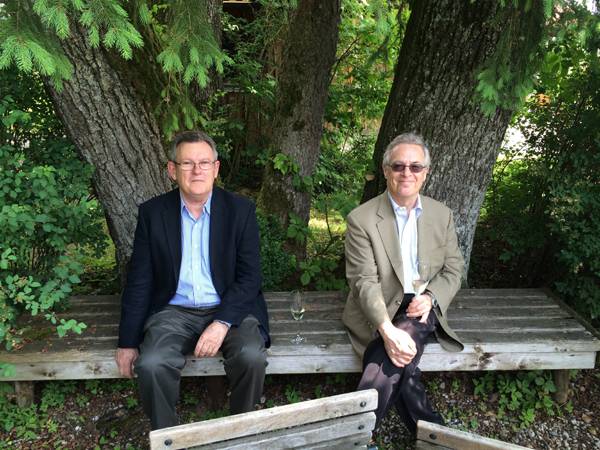 The Loeb Classical Library contains over 500 of the most important publications of Greek and Roman antiquity, translated from Greek and Latin into English. It is in the care of the Harvard University Press in Boston and has also been available in digital form since the autumn of 2014. As the spiritus rector and patron of this library James Loeb had set himself the task of making this universal knowledge accessible to all those interested. It continues to attract attention and is being expanded as Loeb himself would have wished. Three to five volumes are published every year. The aim of the visit which took place was to investigate the possibilities of a cooperation. The James Loeb Society was delighted that Jeff Henderson and Richard Thomas travelled to Murnau for precisely this purpose.

Everything was planned in advance. The visitors from Boston – Jeff Henderson, publisher of the Loeb Classical Library and Richard Thomas, Professor of Greek and Latin Historical Philology at Harvard University and Dean of the Classical Department as well as director of the James Loeb Foundation – were expected on Monday, 8 June 2015. But the aircraft from Reykjavik landed without them. Fortunately it soon transpired that Mr Henderson and Mr Thomas had failed to board the flight to Munich as a result of delays. But they arrived on Tuesday and an exciting and varied visit for all participants began.

Andrea Olmstead, academic expert in theory of music and an expert on James Loeb and music, also from Boston, was our third guest. She has published an excellent book, Juilliard: A History, about the Juilliard School in New York, with which James Loeb was also closely associated.

The visit started with a short sightseeing tour through Munich with Hans-Peter Söder, director of the Junior Year in Munich programme of the LMU in Munich. The first impression ended – inevitably – in a Bavarian tavern.

Wednesday was a busy day. In order to investigate the possibilities of a close cooperation between the Loeb Classical Library (LCL) and the James Loeb Gesellschaft e. V., a workshop was held between Jeff Henderson, Richard Thomas, Hermann Mayer, Robert and Annette Skogstad, Friedrich Glauner and Gebke Mertens at Hans-Peter Söder’s offices; he had kindly made his institute available for the occasion. It soon became clear that it would be in the interests of both parties to continue the constructive dialogue at an early date and to examine the subjects of summer school, lectures etc. in greater depth.

After a light lunch in one of the student haunts in Schwabing, Florian Knauß, director of the State Collections of Antiquities and the Glyptothek in Munich, welcomed the group and led them on a two-hour guided tour through the magnificent Collection of Antiquities, of which he is the director and which also houses the James Loeb collection. Since the museum is preparing an exhibition about the Etruscans – which was to be shown from mid-July 2015 for one year – many of Loeb’s figurines were stowed away in the archive. The visitors were also able to visit the latter, which aroused considerable enthusiasm. It was only possible to pay a brief visit to the Glyptothek, because time was passing rapidly. Mr and Mrs Skogstad accompanied Mr Henderson and Mr Thomas to the Hotel Kaiserin Elisabeth in Feldafing on Lake Starnberg, where they enjoyed a relaxing evening meal. Thursday was spent in Murnau under the auspices of James Loeb. Hermann Mayer led the group through the Villa Hochried, during which they were joined by the directors of the clinic, Stephan Springer and Andreas Auer. The guests were very impressed by the clinic’s work on behalf of children, young people and families and by the clinic school. They also visited the grave of Antonie and James Loeb. Christa Mayer invited ten guests to a summer lunch at the Sonnenstein and this was followed during the afternoon by a guided tour of Schlossmuseum Murnau. Andrea Olmstead joined the group on this day; she had been enjoying the kind hospitality of Uta Strack (a member of the James Loeb Society) for the entire duration of her stay. On Tuesday she and Christa Mayer had accompanied Mrs Olmstead to the Richard Strauß Institute in Garmisch, continuing to Ettal, Oberammergau and finally into the Karg Bräustüberl, where the ladies’ programme ended with an “Obama” wheat beer. On Wednesday Uta Strack and Christa Mayer accompanied their guest to Augsburg in order to introduce Mrs Olmstead to James Loeb’s collection of sheet music in the New Municipal Library in Augsburg under the expert guidance of Robert Forster. This was followed by a tour of the town, so that a pleasant day was had by all.

It was an intensive and inspiring few days with animated and far-reaching conversations. Above all, however, new friendships were forged and new links built between the United States and Germany, between Boston and Murnau. Valuable first steps were taken towards a closer cooperation between the Loeb Classical Library and the James Loeb Gesellschaft e. V. It would not be too much to claim that James Loeb would be pleased to see these developments. A project group of the James Loeb Society is now working towards expanding this exchange for the benefit of both societies. It is planned that the Loeb Classical Library will be main focus in both Munich and Murnau during 2016. Gebke Mertens.